Donna Milham founded Eagle & Dove Ministries in 1999 and serves as the senior leader. She has a calling as an apostolic leader to train, equip and release a people to know God’s blueprint for their lives and embrace their destiny with passion and perseverance. Her desire is to personally walk in the love of God in an experiential way and be established on the foundation of what His Word has to say regarding who we are in Christ and to release this in her sphere of influence.

Donna’s heart is for an army of His people to arise whose lives are not their own, living in the Galatians 2:20 lifestyle, who live for His heart’s desires. She wants to see a people who know where they fit in and why, and, therefore, will fulfill all the dreams God has for their lives.

Her vision is for a team/tribe that will train and release others to walk as pioneers and to bring transformation to a region and across the nations. This team will focus on releasing prophetic worship, the arts, intercession and declarations to shift the atmosphere of earth, opening the eyes of people’s hearts, and aligning them with Heaven. To release fresh sounds and songs that mingle with revelatory teaching and prophetic decrees to bring us deeper into the Heart of God. That God’s Kingdom plans would come forth and a people would arise from hearts of devotion unto the One True King and be blazing torches of holy desire that He thrusts into the night with holy light.

Donna is a teacher, prophetic dancer, worshiper, percussionist, poet and writer, and loves to lead others in the contemplative art of waiting on God and hearing His Voice. She also loves to teach on how to live a prophetic lifestyle. She believes this is the hour for holy takeover – a holy revolution – holy visitation for the transformation of our lives, that we would have His divine nature deposited within our spirit. That visitation would lead us further into the reality of being carriers of His glory, a place where He abides. We then can be a people willing to leave the comfortable and familiar and pioneer as Holy Spirit leads and bring forth community transformation.

She has a passion for the Body to corporately encounter and minister to the Lord. Her heart’s desire is that the world will know His jealous roar of passionate love and respond in holy abandonment. Her heart’s cry is to minister to the Lord and give Him His heart’s desire – to weave a tapestry of God’s nature and character for every eye to see and every ear to hear the goodness and greatness of His Name. She wants to see a people who carry the spiritual DNA of revolutionaries with faces like lions and His roar of jealous love in their hearts and spirits.

Donna and this ministry have a heart for the indigenous peoples of the world, especially First Nations of Turtle Island. We have a heart for the ministry of reconciliation and restoration of all people groups, and want to see indigenous people groups rise up as the gatekeepers and host people of their lands, to have their cultural expressions of regalia, dance, worship and art restored. We want to see a place, through true covenant relationship, for their unique giftings from God to come forth, and for a platform to be given for them to take their place in the body of Christ. We are incomplete without our indigenous brothers and sisters.

Donna married Gary Carpenter in 2016, together they believe for God’s awakening of Cape Ann and beyond!

Gary Carpenter has been part of Eagle & Dove Ministries since 2013.  He loves to worship, is a man of prayer and intercession with a gift of discernment and seeking the deep truths of God.  He has a passion and a call to serve through the ministry of physical and emotional healing. He has the heart of a servant and the gift of helps.  His vision is that Cape Ann would encounter the amazing grace, love, and healing compassion of God.

Gary is married to Donna Milham and together they serve the Lord on Cape Ann.  He is a self employed contractor serving Cape Ann.

Karen Elliott has been a part of Eagle & Dove Ministries since 2002. She is an Eagle & Dove Ministries Board Member, serving as secretary and also serves as a Pastor at Judah’s Roar Church. She is part of the Judah’s Roar Worship Team playing Native American flute and percussion. Karen has a prophetic anointing and operates in a Seers gifting. Her heart’s cry is to know the Truth, the whole Truth and nothing but the Truth and to see the church come into the fullness of who we are in Christ, shaped into His nature and character.

Karen is ordained by Eagle & Dove Ministries and serves as Assistant Pastor of Judah’s Roar Church and Worship Center. She is a graduate of Francis Frangipane’s ‘In Christ’s Image’ Training School, a number of Streams Ministries Training courses and is a member of MorningStar Fellowship of Ministries. She has served as a Shepherd of Cell Groups, led Bible Studies and served a number of years as President of a local Chapter of Aglow International. Jenny Brinton has been a part of Eagle and Dove Ministries since 2008. She loves to dance before the King of Kings in worship, every movement and color a declaration in the spirit realm. She also walks in other creative gifts, such as writing, painting, tie-dye-ing silks, and beading. Her heart is to serve those she links arms with, in whatever way she is able.  Jen has a natural gift of teaching and loves to share fresh insights of God’s Word with overflowing joy.

She longs to see her generation hungering after God more than the things of this world, as well as reconciliation within the Church and between generations. She loves diversity, and looks forward to the day when every tribe, tongue, and nation is worshiping together in the heavens.

Carol Douville has been a part of Eagle & Dove Ministries since 2004 and serves on the worship team. She has been called to be a radical worshiper carrying the heart of a mother to bring freedom to young people. Her heart’s desire is to equip and mentor young people to enlist in the army of the Lord as worshiping warriors. She lives in Connecticut and has two married daughters and several grandchildren.

Cherish Edgerton has been a part of Eagle & Dove Ministries since 2014.  She is called to lead worship and her heart is to release the atmosphere of heaven through sounds and songs from Above.  Her vision is that God’s Presence would so encompass His people in times of worship that supernatural healing would break forth.  Bodies would be healed, broken hearts made whole, and the lost saved. David Kieller co-leads the Prophetic Arts Ministry at Eagle & Dove Ministries where he seeks to continually grow in his calling as a Kingdom Artist. He is passionate about being part of raising up a company of artists that bring honor and glory to the Father in their gifts and callings. He is also a passionate Kingdom songwriter. David’s vision coincides with many for the full expanse of all the creative arts to fuse together in harmony and power exalting Christ as King, Bridegroom, warrior, etc. within the Body of Christ as well as impacting souls that need to know God’s love and salvation. David moved from Western Canada in 2003. Some of his Artworks find their home in private and corporate collections, as well as with foreign dignitaries throughout the world.

Debi Luczai has been a part of Eagle and Dove Ministries since 2006. She has been called as an intercessor whose greatest desire is to hear what is on the Father’s heart and to be obedient to all that He says. She loves to see others touched by the love and grace of the Father. She resides in Freedom, Maine with her husband Gary. Together they have a business called ‘Antler Design’.

Darren Sidell
Darren serves as ministry leader of ushering and is also a board member of Eagle & Dove Ministries. He has been a part of Judah’s Roar since 2007. His posture is to stand for God’s plans to come forth for the city of Gloucester, this region and this nation.

In the 90’s Darren served as a youth minister and youth center director in Gloucester and continues to have a heart for the youth and families in the area. He is self employed and has been running his own business for over 20 years. Darren is a prophetic artist and seeks to be led by the Holy Spirit in his creative gifts and in all that he is called to. His heart is to follow the Lord with perseverance, every step of the way, one step at a time. 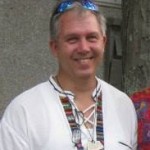 Peter King has been a member of Eagle & Dove Ministries since 2007. He has the heart of John the beloved. He is a man with a very tender and compassionate heart. Peter shares from the posture John had with Jesus, leaning against His chest, listening to His heart.

Peter is a gifted artist with a healing and prophetic flow. He is a minister of reconciliation, restoring the brokenhearted and setting captives free. Peter is a man of wisdom and insight who walks with a strong gift of discernment and also functions in the gift of dream interpretation. Peter is married to Lupe’, who is also a member of this ministry.

Lupe King has been a member of Eagle & Dove Ministries since 2007. Lupe’s personal healing from childhood abuse, alcoholism and witchcraft has given her a unique position of compassion to minister to hurting people.

Lupe is a Seer with an unceasing heart for intercession for the Kingdom of God and, with great passion, seeks the restoration of His kingdom on earth. She has a desire and a passion for meeting people where they are, with a heart ready to listen. Her goal is to be God’s tangible presence for all that would seek Him.

Her heart’s cry is that the bride of Christ would emerge from the physical four walls of the church buildings and would ‘come-out’ and engage Jesus as He walks amidst fallen humanity, that ALL would be given the opportunity to come to know the height, the depth, and the width of God’s love for them.

Lupe is also a poet that paints prophetically, a writer and gifted teacher. Lupe is married to Peter King and together they have several children and many grandchildren and countless family as they live the father/mother, brother/sister, friend aspects of the Christian family.